What is Lung Cancer?

Lung cancer is the leading cause of cancer death in both men and women. Lung cancer is a cancer that usually starts in the lining of the bronchi (the medium-sized airways within lungs), but can also begin in other areas of your respiratory system, including the trachea (main breathing tube), bronchioles (smaller branches of the air passages), or alveoli (the tissue farther out in the periphery of the lung). 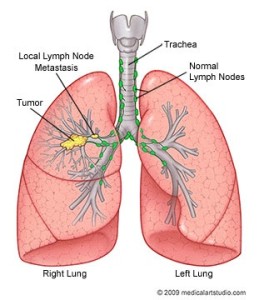 Lung cancers are believed to develop over a period of many months to years. Nearly all lung cancers are “carcinomas”—tumors that begin in the lining or covering tissues of an organ. The tumor cells of each type of lung cancer grow and spread differently, and the treatments of these various types differ to some extent. About 85 percent to 90 percent of lung cancers belong to the group called non-small cell lung cancer.

The following are the most common symptoms for lung cancer. However, each individual may experience symptoms differently.

Lung cancer usually does not cause symptoms when it first develops, but they often become present after the tumor begins growing. A cough is the most common symptom of lung cancer.

Other symptoms can be caused by substances made by lung cancer cells – referred to as a paraneoplastic syndrome. For example, certain lung cancer cells produce a substance that causes a sharp drop in the level of sodium in the blood, which can cause many symptoms, including confusion and sometimes even coma. Some tumors will cause swelling and pain along the shins in both legs, known as pulmonary hypertrophic osteoarthropathy.

None of these symptoms is a sure sign that you have lung cancer. Only a physician can tell whether your symptoms are caused by cancer or by another problem.

Consult your physician for a diagnosis.