Estimated new cases and deaths from breast cancer in the United States in 2013:

Inside a woman’s breast are 15 to 20 sections (lobes). Each lobe is made of many smaller sections (lobules). Lobules have groups of tiny glands that can make milk.

After a baby is born, breast milk flows from the lobules through thin tubes (ducts) to the nipple. Fibrous tissue and fat fill the spaces between the lobules and ducts. 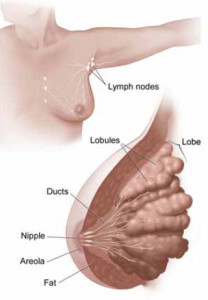 This picture shows the lobes and ducts inside the breast. It also shows lymph nodes near the breast.

Cancer begins in cells, the building blocks that make up all tissues and organs of the body, including the breast.

Normal cells in the breast and other parts of the body grow and divide to form new cells as they are needed. When normal cells grow old or get damaged, they die, and new cells take their place.

Sometimes, this process goes wrong. New cells form when the body doesn’t need them, and old or damaged cells don’t die as they should. The buildup of extra cells often forms a mass of tissue called a lump, growth, or tumor.

Tumors in the breast can be benign (not cancer) or malignant (cancer):

Breast cancer cells can spread by breaking away from a breast tumor. They can travel through blood vessels or lymph vessels to reach other parts of the body. After spreading, cancer cells may attach to other tissues and grow to form new tumors that may damage those tissues.

For example, breast cancer cells may spread first to nearby lymph nodes. Groups of lymph nodes are near the breast under the arm (axilla), above the collarbone, and in the chest behind the breastbone.

Breast cancer is the most common type of cancer among women in the United States (other than skin cancer). In 2013, more than 232,000 American women will be diagnosed with breast cancer.

Other women have a mixture of ductal and lobular type or they have a less common type of breast cancer.

After you find out that you have breast cancer, you may need other tests to help choose the best treatment for you.

Lab Tests with Breast Tissue
The breast tissue that was removed during your biopsy can be used in special lab tests:

It may take several weeks to get the results of these tests. The test results help your doctor decide which cancer treatments may be options for you.

Staging tests can show whether cancer cells have spread to other parts of the body.

Your doctor needs to learn the stage (extent) of the breast cancer to help you choose the best treatment. Staging tests may include…

Questions you may want to ask your doctor about tests

The stage of breast cancer depends on the size of the breast tumor and whether it has spread to lymph nodes or other parts of the body.

Doctors describe the stages of breast cancer using the Roman numerals 0, I, II, III, and IV and the letters A, B, and C.

The stage often is not known until after surgery to remove the tumor in the breast and one or more underarm lymph nodes.

Stage IA
The breast tumor is no more than 2 centimeters (no more than 3/4 of an inch) across. Cancer has not spread to the lymph nodes.

Stage IB
The tumor is no more than 2 centimeters across. Cancer cells are found in lymph nodes.

Stage IIA
The tumor is no more than 2 centimeters across, and the cancer has spread to underarm lymph nodes.

Or, the tumor is between 2 and 5 centimeters (between 3/4 of an inch and 2 inches) across, but the cancer hasn’t spread to underarm lymph nodes.

Stage IIB
The tumor is between 2 and 5 centimeters across, and the cancer has spread to underarm lymph nodes.

Or, the tumor is larger than 5 centimeters across, but the cancer hasn’t spread to underarm lymph nodes.

Stage IIIA
The breast tumor is no more than 5 centimeters across, and the cancer has spread to underarm lymph nodes that are attached to each other or nearby tissue. Or, the cancer may have spread to lymph nodes behind the breastbone.

Stage IIIB
The breast tumor can be any size, and it has grown into the chest wall or the skin of the breast. The breast may be swollen or the breast skin may have lumps.

Stage IV
The tumor can be any size, and cancer cells have spread to other parts of the body, such as the lungs, liver, bones, or brain.